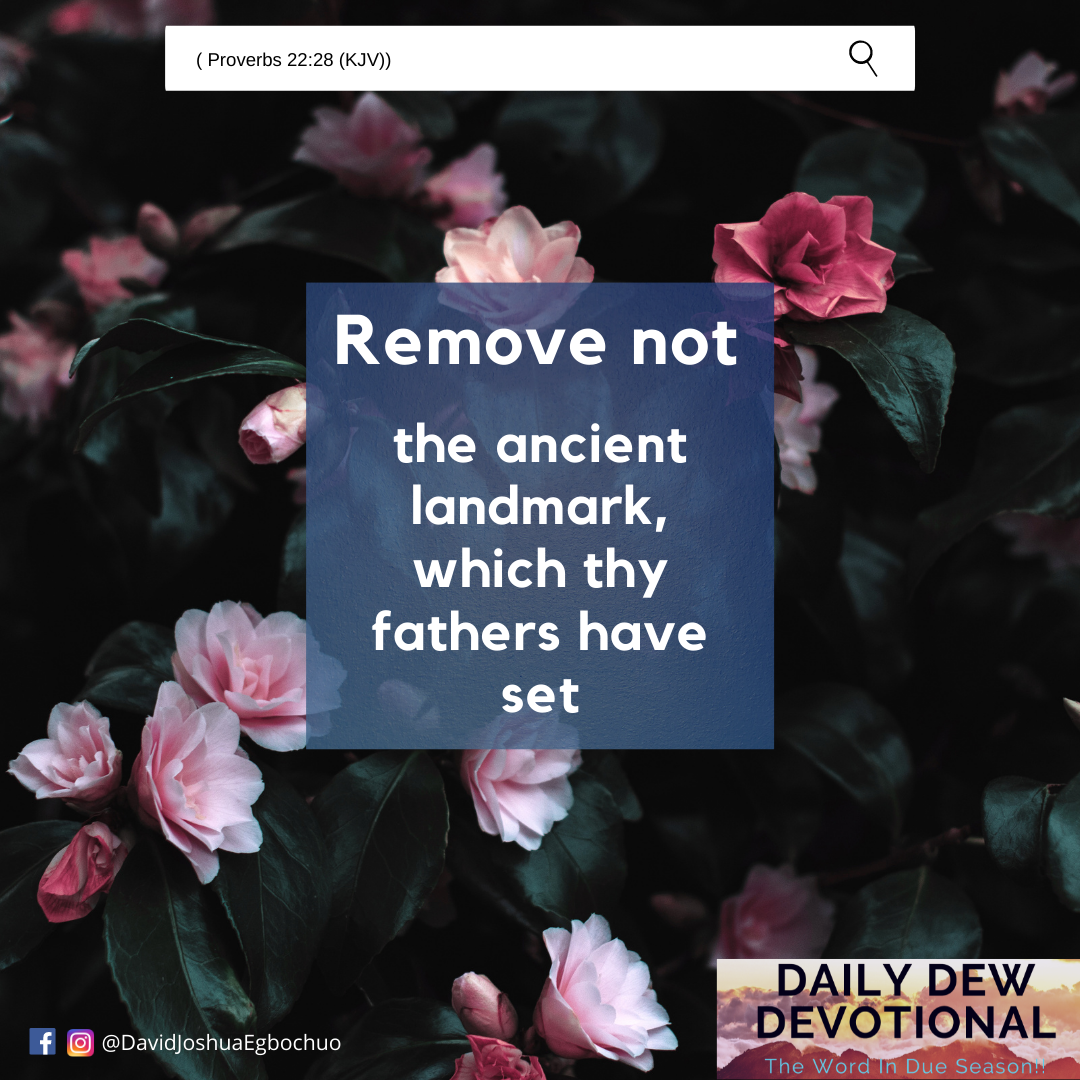 *DAILY DEW 7TH/JUNE/2021*
*REDISCOVERING THE MESSAGE.*
_Key Bible Text:_
*"Remove not the ancient landmark, which thy fathers have set."* (Proverbs 22:28 (KJV))
_Bible Insight:_
It's my opinion, that if we don't go back and study and I mean really study the early church, and read from early authors, we will lose critical concepts of God and the Church. Over time, emphasis change, even over the last one hundred years. Some truths can become lost. If you are only reading popular 21st Century American authors, you may be missing something extremely important to the Christian faith.
Not considered "ancient" by any means, read Watchman Nee. Read "The Practice of the Presence of God" by Brother Lawrence. Read Dietrich Bonhoeffer. Read "The Dictionary of Early Christian Beliefs" by David Bercot.
Read "A Glimpse at Early Christian Church Life" by Tertullian. Read "Polycarp's Letter to the Philippians & His Martyrdom". There are too many to name. But important truths are being lost. When is the last time you really heard a good message about God and His Holiness? When is the last time you heard about the fear of God?
The 21st Century message is MUCH different than it was in the first and second centuries. Even over the past century. Before, the heavy focus was on God. Now it's on ourselves. I'm telling you, the message has changed. Take some time and reacquaint yourself with the messages of old. Discover what's been lost over time.
You will be amazed.
*MEDITATION:*
*But though we, or an angel from heaven, preach any other gospel unto you than that which we have preached unto you, let him be accursed. As we said before, so say I now again, If any man preach any other gospel unto you than that ye have received, let him be accursed.* (Galatians 1:8-9 (KJV))
*#Reggie_D_Bynum*
*#Monday_wisdomforliving*
*#Becoming_More_Like_Jesus*
*#Guest_Message*
*#Hello_June* ❤

Popular posts from this blog

THE DAWN OF A NEW DAY *DAILY DEW 25TH/OCTOBER/2020* *THE DAWN OF A NEW DAY* _Key Bible Text:_ *“Arise, shine; for thy light is come, and the glory of the LORD is risen upon thee.For, behold, the darkness shall cover the earth, and gross darkness the people: but the LORD shall arise upon thee, and his glory shall be seen upon thee."* ( Isaiah 60:1-2 (KJV)) _Bible Insight:_ When we pay attention to Isaiah 60 verses 1-2, we will realize that the Lord planned life in such a way that death produces life; light is pronounced by darkness; forgiveness is given a meaning by unforgiveness; love is made to come to light by hate; peace is perfected by war and the list goes on. Basically, you can't appreciate one without the other.  Death produces life, just as the morning is born from the womb of the night. Trials give rise to strength by the exercise of muscles that would not be engaged without such trials. There is indeed gain in pain. Something good can always come out from every bad circumstanc
Read more *DAILY DEW 29TH/NOVEMBER/2020* *HAPPINESS vs PURPOSE* _Key Bible Text:_ *Let us keep our eyes fixed on Jesus, on whom our faith depends from beginning to end. He did not give up because of the cross! On the contrary, because of the joy that was waiting for him, he thought nothing of the disgrace of dying on the cross, and he is now seated at the right side of God's throne. Think of what he went through; how he put up with so much hatred from sinners! So do not let yourselves become discouraged and give up.* (Hebrew 12:2-3 (GNB)) _Bible Insight:_ It is said that doing what makes you happy is a sign that you are fulfilling purpose. Well, I want to burst your bubbles a little. It is not always true that what makes you happy will necessarily be what your purpose is connected to. Sometimes, what makes you happy might just be that selfish you enjoying what you are doing-- that can never be you fulfilling purpose.  Now let's look at this from the perspective of the life of
Read more http://bit.ly/Called-To-Be-Kings-And-Priests *DAILY DEW 19TH/OCTOBER/2020* *Birth Pangs For A New Nigeria* (III) _Key Bible Text:_ *Go to, let us go down, and there confound their language, that they may not understand one another's speech. So the LORD scattered them abroad from thence upon the face of all the earth: and they left off to build the city.* (Genesis 11:7-8 (KJV) ) _Bible Insight:_ Project babel was disrupted. The disruption was divine. The disruption happened because project babel was actually in opposition to God's idea and will: Genesis 1:28 (KJV) *And God blessed them, and God said unto them, Be fruitful, and multiply, and replenish the earth, and subdue it: and have dominion over the fish of the sea, and over the fowl of the air, and over every living thing that moveth upon the earth* When you place project babel side by side with the ongoing movement in Nigeria, you will see some striking similarities as well as a major difference. The similariti
Read more